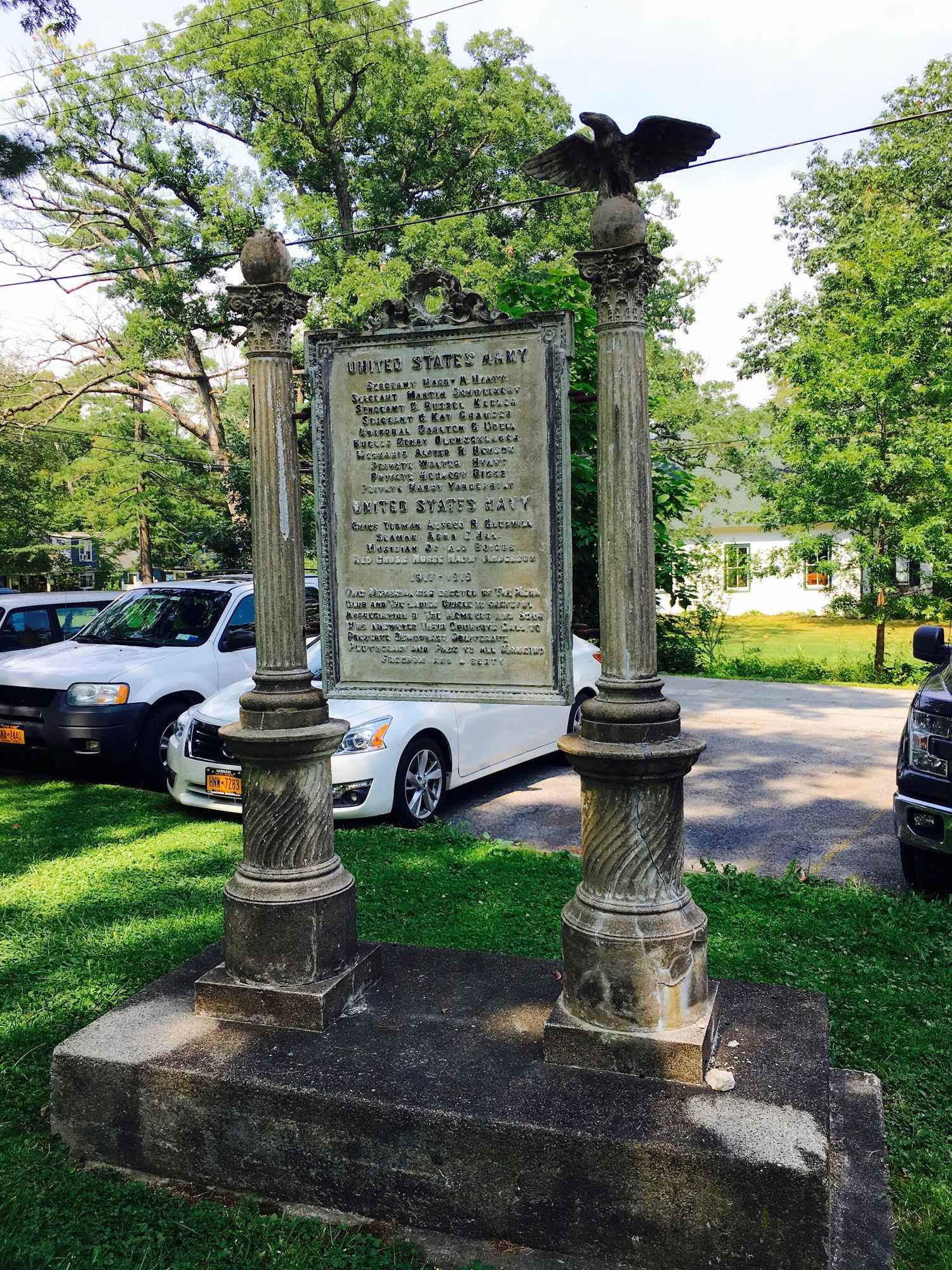 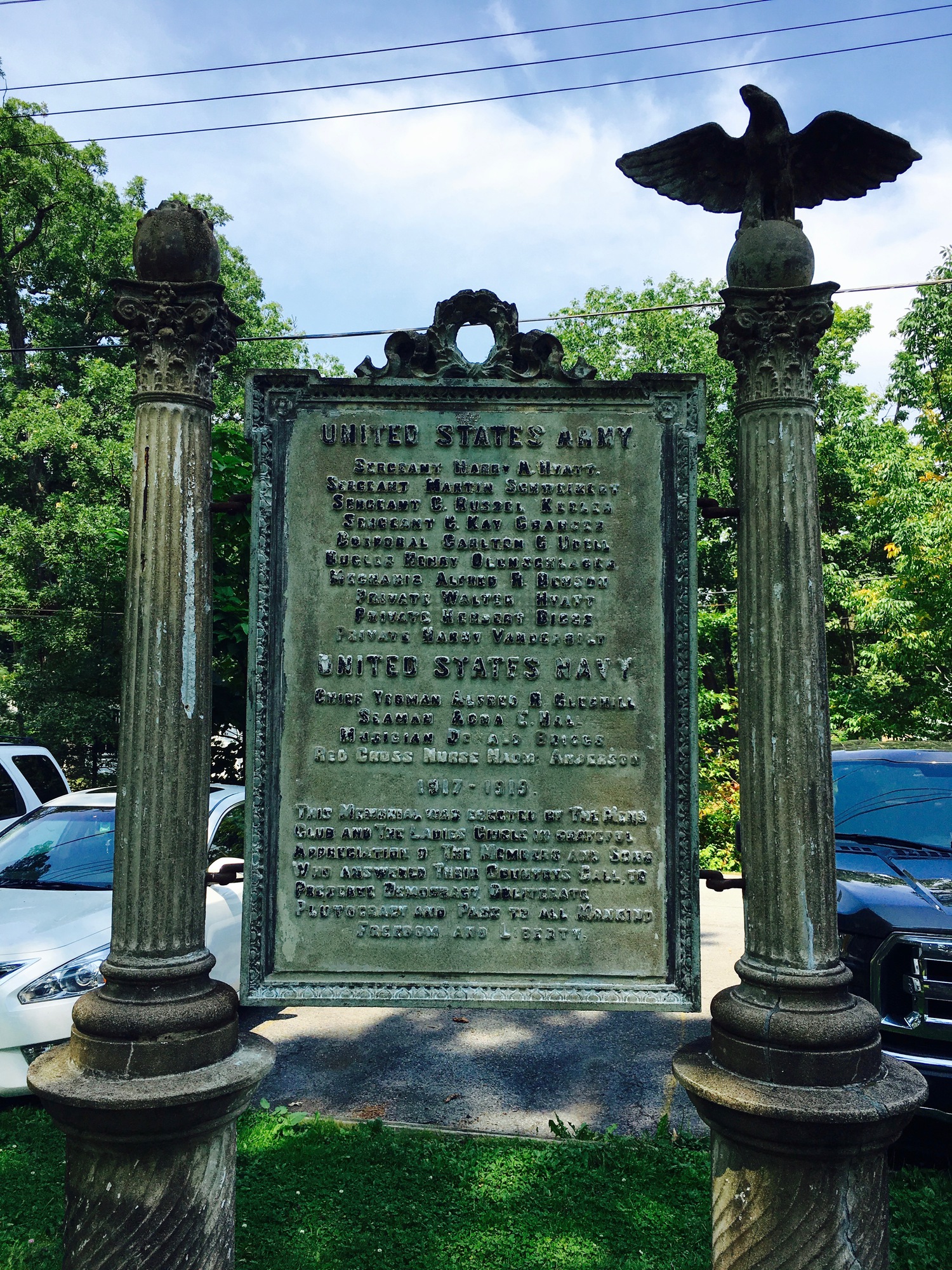 Campwoods Grounds is located in Ossining, New York, a Hudson River village in Westchester County. Campwoods was on the village outskirts, a summer meeting ground for New York City Methodists since 1831. Now a private residential community, it is located on Campwoods Rd. off Rte. 133.

After World War I, the community joined thousands of others in commissioning a monument to those of its families who served. We don’t know who designed this honor roll memorial; it may have been ordered from a catalogue or commissioned privately. It seems to be made from cast concrete. The classical columns and the eagle with outstretched wings are familiar motifs. As you can see, there were at one time, two eagles, all that’s left of this one are is claws. The unusual inscription reads: “This memorial was erected by the Men’s Club and the Ladies Circle in grateful appreciation to members and sons who answered their country’s call to preserve democracy, obliterate plutocracy and pass to all mankind freedom and liberty.”

With one exception, the 13 men and one woman whose names are on this memorial are not from Ossining but from the city [New York City], predominantly Brooklyn, and they all came home. Some are the children of Swedish immigrants who began to hold their own Methodist meetings at Campwoods in 1854. There is only one Ossining native: Harry Vanderbilt, son of the village’s first mail carrier.

Starting at the top with the U.S. Army, Sergeant Harry Albert Hyatt was born in 1888; he worked in the carting business. He and his younger brother Private Walter Hyatt, who is down here, lived on Hancock Street in Brooklyn. Harry went into the Army first, in 1917 spending two years overseas with the 501st Engineers. Walter took machine gun training at Fort Hancock, Ga,, but by the time he arrived overseas, in October 1918, the War was over. The peace treaty with Germany wasn’t signed until June of 1919, so like many servicemen, Harry stayed through that year. He worked for the U.S. Army Postal Express Service, the first all military mail service in American history, until his discharge.

Army Sergeant Martin Schweikert fought the Germans on the Western Front with Squadron A, a National Guard cavalry unit, and the 105th Infantry Regiment. These troops played an important role in smashing through a major German defensive position called the Hindenburg line.

Henry Olenschlager was born in Brooklyn to German immigrants. He met his future wife Louise Schweikert at Campwoods, who happened to be Martin Schweikert’s older sister. They married right after Henry joined the Army in 1918. On his draft form he claimed religious objections to the war. He served as a bugler at Camp Greenleaf, a medical officer training camp in Georgia.

Corporate Carlton Granger Udell was from Brooklyn; on October 20, 1918 he sailed for France aboard the USS Agapenor with a signal corps unit, providing communication and information from the field. The war ended three weeks later, on November 11, 1918, but Udell remained abroad until June of 1919. He ultimately moved to Ossining after the war.

So did Army mechanic Alfred Ruldoph Benson. His parents were Swedish immigrants. Benson served overseas in a support role. By 1922 he was living on Stone Avenue nearby and working as a contractor.

When Herbert Charles Briggs enlisted in June of 1917 he was 25 years old and a salesman for the Hammacher Schlemmer Co., then a hardware store at 4th avenue and 13th St. in Manhattan. He deployed with the 102nd Field Signal Battalion in 1917 and when the war ended he was with the 1st Battalion Signal Corps, After the war he returned to selling hardware.

Harry Clarence Vanderbilt is the only Ossining native on this Honor Roll. He was born in 1888 to Nellie Birdsall and John Vanderbilt, the village’s first mail carrier. They lived on Pinesbridge Rd. Harry left school in the 8th grade and eventually joined the Army in 1914 in California. He joined the 64th Infantry Regiment as part of the Army’s Seventh Division, fighting in France. He was 35 years old by the time he married, to a German woman named Gertrude; he became a village policeman here in Ossining. He died in 1962 and is buried in Sparta Cemetery.
Four Campwoods regulars served with the U.S. Navy.

Chief Yeoman Alfred Reuben Gledhill served aboard the USS Louisville, a passenger liner that was pressed into duty as a troop transfer ship during the war.

Seaman 2nd class Adna Edward Hall enlisted on July 13, 1918. He attended naval training camp in Pelham Bay Park in the Bronx, his last day was November 11, 1918, which also happens to be the last day of World War I. So he dodged a bullet.

I could find no information on “Musician Donald Briggs.”

The only woman on this list, Naomi Marie Elizabeth Anderson, was born in Jersey City, New jersey, in 1894. Her parents, Frank and Matilda Anderson, were born in Sweden. She attended college for three years, which was unusual for a woman in the early 20th century. It says she was an American Red Cross Nurse, but she was more than that; in 1916, she enlisted the Navy Nurse Corps. This made her one of the first women to join the U.S. military. She was stationed at Methodist Episcopal Hospital in Brooklyn and then sent to the Naval Hospital in Newport, Rhode Island. She was honorably discharged in 1922, at the age of 28, and got married two years later. She had one child, a daughter, and lived in New Jersey all her life before passing away in 1984 at the age of 90. She sounds like quite a lady.

So why does this matter? Why should we care about a memorial to a war that is almost forgotten today? War is traumatic, for those who serve and the families who behind to worry. These service people came home to marry, have children and careers, but they carried the difficult memories within them until their deaths. They may not have been from Ossining, but they fought for all of us. And as the wars have piled up, in the 20th century and now this one, our military men and women bear the cumulative pain and hope of a nation. It is up to the rest of us to ensure that their service and sacrifice is never forgotten.