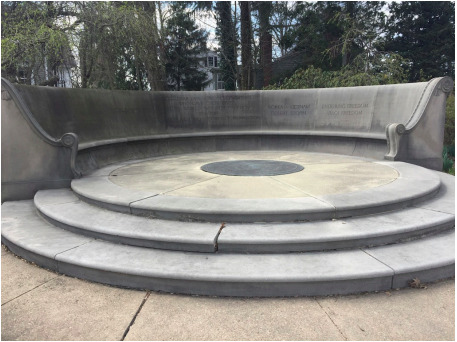 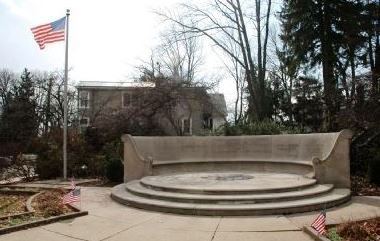 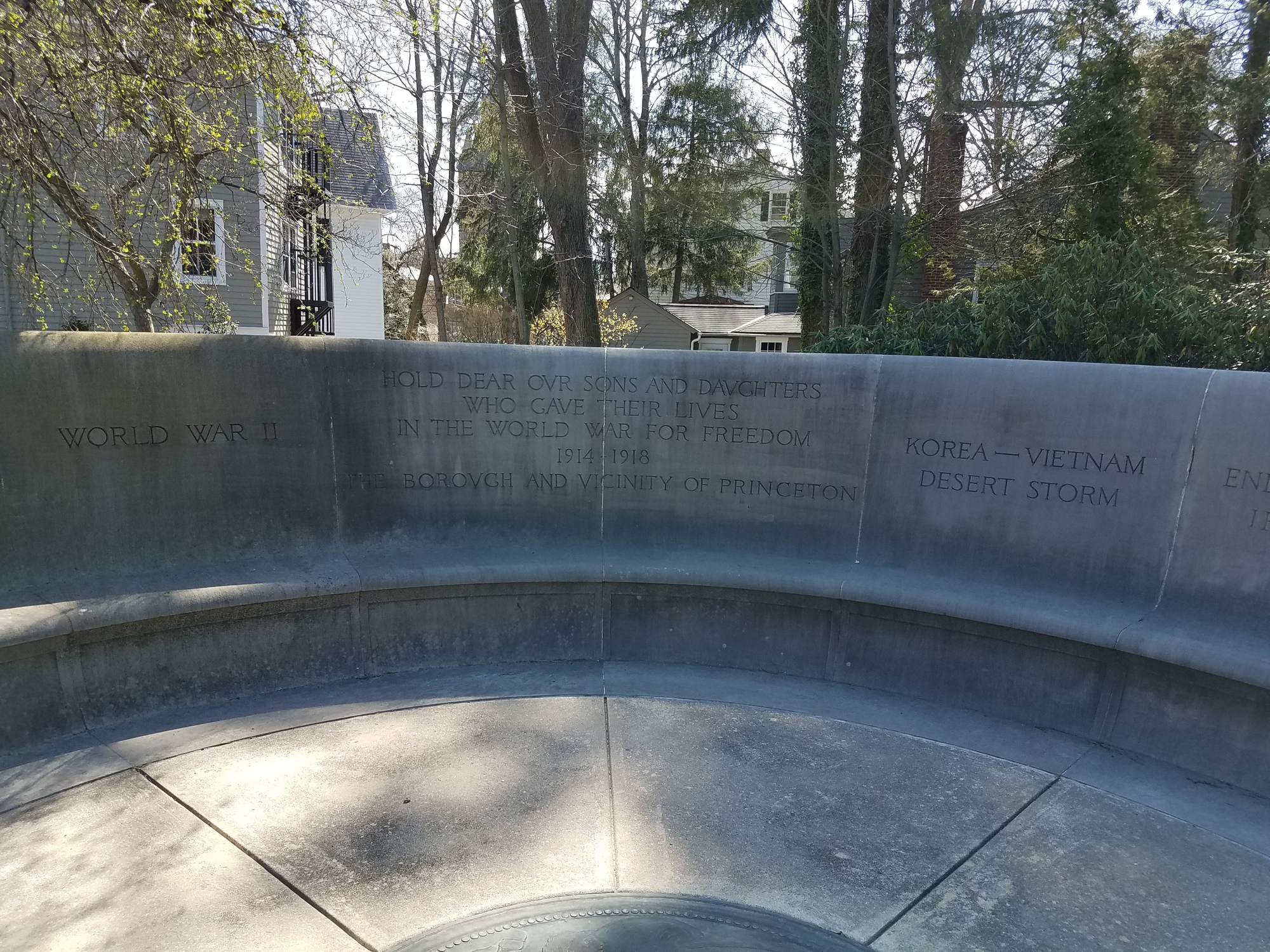 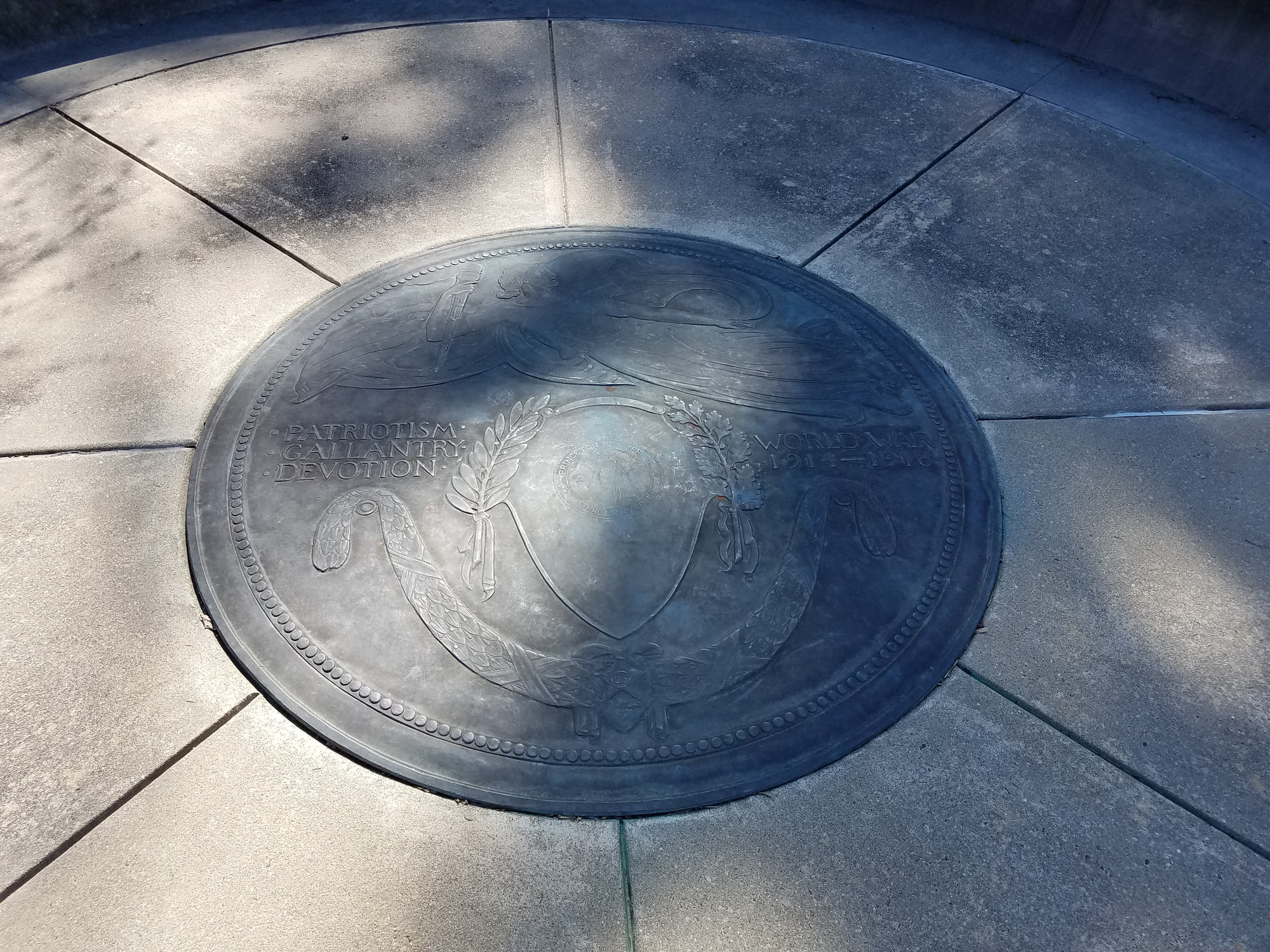 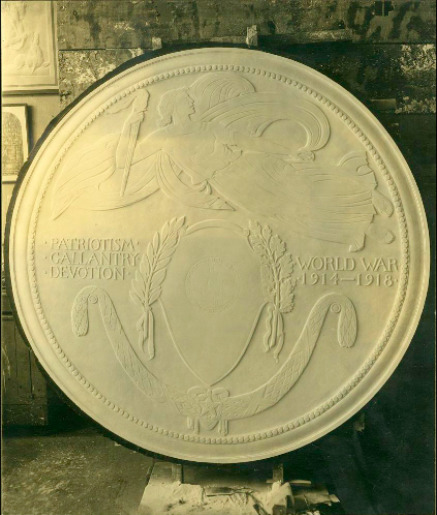 The Memorial structure, designed by architect Harvey Wiley Corbett, is 24ft 4in in diameter, with a height of 6ft 5.25in at it’s highest point, the back of the seating area on the western circumference. At it’s center is a circular bronze medallion fashioned by sculptor Gaetano Cecere measuring 68 inches in diameter. The memorial is the focal point of a garden plot on the southwest corner of the intersection on Mercer Street and Nassau Street (NJ Route 27).

HISTORY
The Princeton Wars Memorial sits now in it’s original location as proposed in 1918 and dedicated in 1925.

The project was conceived and proposed in 1918 by a committee of prominent citizens as “a common expression of admiration and gratitude towards those who died in a great cause”. Among the major contributors to it’s construction were Mr. Allan Marquand, Mr. Bayard Stockton, Mr. Gerard Lambert, Mrs. Moses Taylor Pyne, and Mrs. Thomas J. Preston, the widow of President Grover Cleveland. Property for the project was donated by Mr. Moss Taylor Pyne and the Nassau Club. After a careful selection process, the artistic commission for the monument was awarded to a very prominent American architect, Mr. Harvey Wiley Corbett.

INSCRIPTIONS
All inscriptions appear either on the surface of the bench back or on the central medallion.

Originally designed as a WWI memorial, the commemorative inscription for that war appears in the center of the bench back surface. The inscription reads “Hold dear our sons and daughters who gave their lives in the world war for freedom, 1914 - 1918, Borough and vicinity of Princeton”.

On the left side of the central medallion is a three word legend reading “Patriotism, Gallantry, Devotion”, while on the left side are the words “World War, 1914 — 1918”.

CONDITION
The current condition of the Princeton Wars Memorial can best be described as “fair, but deteriorating”. The sandstone is showing significant areas of discoloration, and the seams of weather-induced disintegration. It’s care and maintenance has fallen, at various times, into the hands of such organizations as the Princeton Chamber of Commerce and the Princeton Garden Club. This latter, with the help of local landscapers, has had a long association with the keeping of the monument’s garden grounds, and undertook the last significant attempt at conservation in 2014. Currently, there is no individual or organization identifiable as responsible for the memorial, but The Princeton Chapter of the Daughters of the American Revolution is in the process of raising funds to restore this town treasure.